The United States Two Cents is an unusual denomination that first appeared in 1864, during a period of coin shortages caused by the Civil War. Attempts to introduce the Two Cents denomination occurred in 1806 and 1836, but both efforts failed due to technical considerations. In 1863, Mint officials revived the idea of a Two Cents Coin simultaneous with their plans to reduce the weight and metal content of the bulky, Copper-Nickel Indian Head Cent. Apparently, the Mint noticed the success of the privately issued Civil War tokens of One Cent size (on thinner, pure copper planchets) and realized that the public was now ready to accept what were essentially underweight coppers. In 1864, the Mint effectively destroyed the market for Civil War tokens by issuing almost forty million Indian Cents on copper planchets and nearly twenty million of the new Two Cents (at exactly double the weight of the One Cent coins).

The obverse of the Two Cents denomination features a shield with a pair of arrows crossed behind, dangles of leaves and berries on both sides, a scroll with “IN GOD WE TRUST” above, and the date below. The reverse shows the denomination “2 CENTS” within a wreath, all surrounded by the legend “UNITED STATES OF AMERICA”.

Two Cents were issued from 1864 to 1873 and mintages declined steadily each year. Proof examples are known of all years. 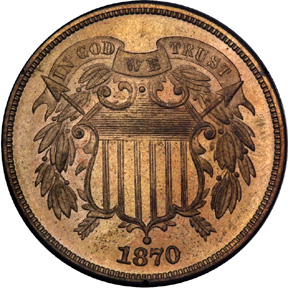